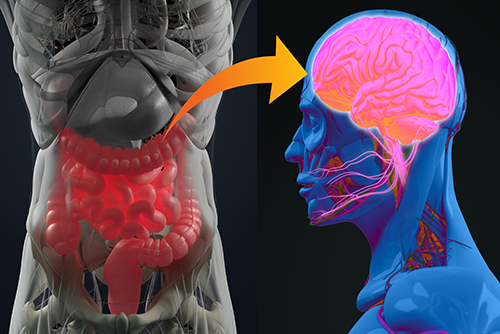 In our society, if you report to your doctor that you’re experiencing mood disorders like brain fog, fatigue, irritability, depression, or stress, chances are he’ll prescribe a psychotropic like an antidepressant to address your issues. Unfortunately, when it comes to mood, there’s currently a one size fits all treatment mentality without ever looking at the underlying physical cause of the mental disruption.

An idea that’s gaining momentum in the medical community but hasn’t yet broken through to medical practice is the gut-brain axis. It means that your brain affects your gut health, and your gut health affects your brain. Furthermore, a growing body of research shows that chronic inflammation in the gut dramatically impacts your mood.1

Feeling queasy before a job interview or feeling nauseous after hearing terrible news are perfect examples of the brain-gut connection. Your brain controls your body’s every function through your nerves, from breathing to movement. A large portion of your brain’s output is directed toward the vagus nerve, which branches into the nerves controlling your heart and your gastrointestinal system.

When you feel stress, anxiety, depression, or any strong negative emotions, your brain activity decreases, which decreases the activation of your vagus nerve.2 This reduced brain activity reduces stomach acid production, gut motility, and intestinal blood flow. The slowing down of digestive functions changes gut flora and causes an overgrowth of harmful bacteria in the gut. These harmful bacteria cause an increase in intestinal permeability, otherwise known as “leaky gut” which causes chronic inflammation.3

The essential point is that mood disorders cause “leaky gut” which causes chronic inflammation.4

In much the same way, the gut has a direct effect on the brain and can send troubling signals that can cause changes in your mood. Your gut is lined with a complex network of neurons embedded into the walls of the stomach, intestines, rectum, colon, and esophagus. This neuron network is so vast and intricate, it’s been dubbed the “second brain,” and its function is regulating all the aspects of digestion from intake to expelling waste.

Studies indicate that 90% of the signals carried in the vagus nerve are going from the gut to the brain, suggesting that the gut communicates directly with the brain, impacting emotions and mood.5

Further affecting the brain are inflammatory cytokines produced in the gut that travel through the blood and go directly to the brain.

The key takeaway is that a constant feedback loop is occurring through the brain-gut connection that impacts your mood, chronic inflammation, and ultimately can manifest into more serious diseases.6

Anti-inflammatory supplements like Omega-3 rich Krill Oil, turmeric, and high-quality probiotics and prebiotics have been shown to help treat a host of gut and mood ailments.

A safer, more bioavailable alternative to fish oil is omega-3 fatty acids in the form of krill oil. These supplements can reduce chronic inflammation along with decrease anxiety and improve mood.7

Turmeric is a natural spice that’s been used for thousands of years in cooking and healing. The healing element in turmeric is called curcumin, it’s the pigment that gives turmeric its bright orange hue, and it’s a powerful antioxidant. Curcumin has been clinically shown to fight chronic inflammation and improve mood.8 A good supplement should include a 95% extract of curcuminoids.

Beneficial bacteria in your digestive tract have substantial positive effects on your brain, immunity system, and digestive health.9 One of the best ways to encourage healthful gut bacteria is to take a daily probiotic.

A recent clinical study found that those who used a probiotic which had specifically had several unique bacteria strains reported a more positive mood and less aggression. 10 The study received a lot of attention as it demonstrated that probiotics could influence brain functions that have the potential to determine the vulnerability to mood disorders.